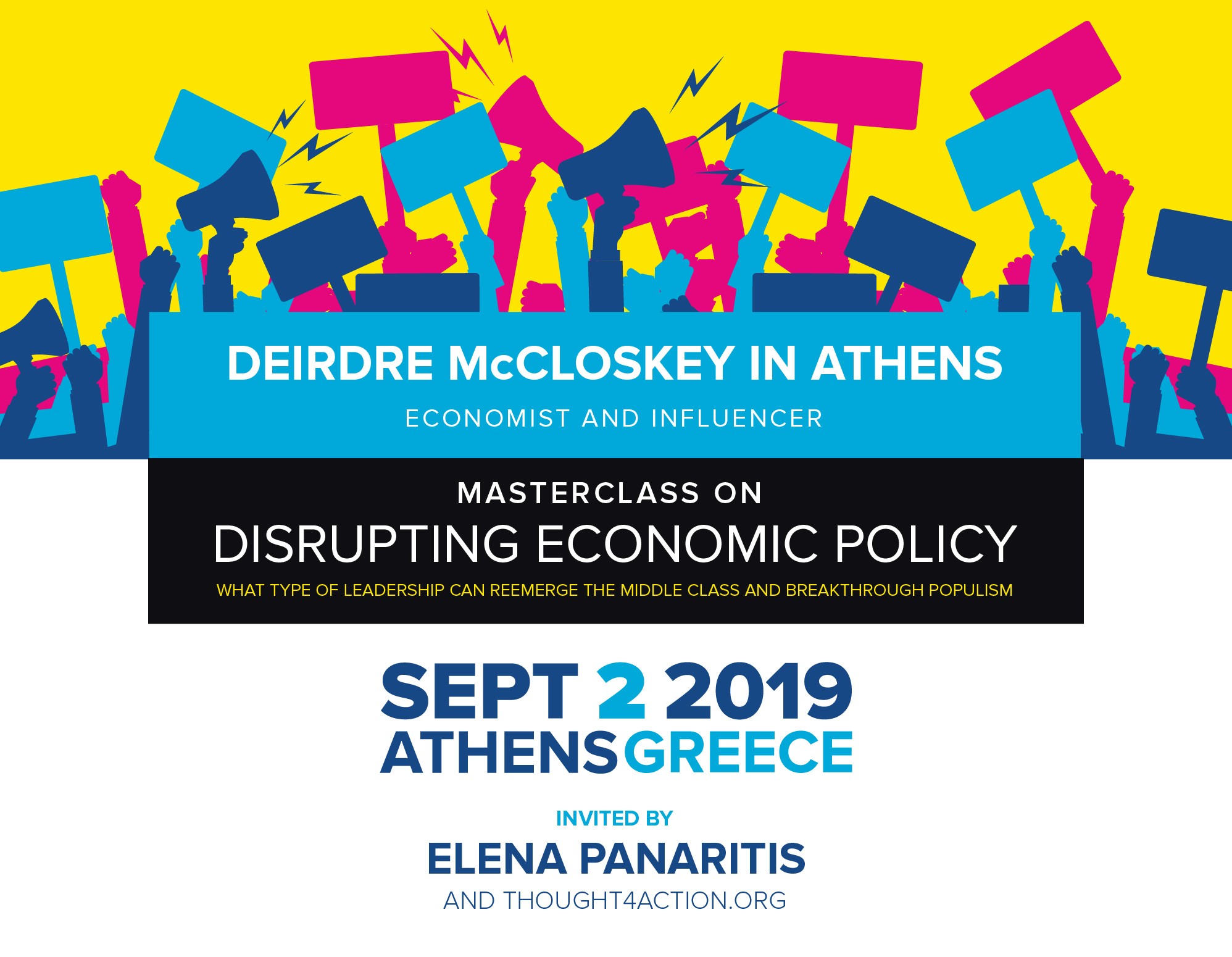 It has been an honour to welcome the legendary Deirdre McCloskey in #Athens, #Greece on the 2nd of September. Invited by T4Action and Elena Panariti (our founder), economist, social entrepreneur and policy innovator. We were excited to be able to welcome an Intellectual and Influencer in a country that is getting out of the deepest economic crisis of post WWII.

Deirdre gave a MasterClass on “How to Disrupt Economic Policy to Defeat Populism and get to Growth. She addressed a selected group of opinion shapers that touch the areas of history, economics, the arts, and politics.
Deirdre is an Economist, Historian, Philosopher, and Rhetorician as she calls her self «student of the art of persuasion». She is legendary for leading economic thinking using history and argues that change in culture and thinking is based on the level of freedom of action and thought. She is a professor of Economic Theory and has thought at universities around the world (starting with the University of Chicago, in the US, and following with universities in the UK, Holland, Sweeden, China, among others). She holds a PhD in Economics from Harvard, and 11 Honorary PhDs 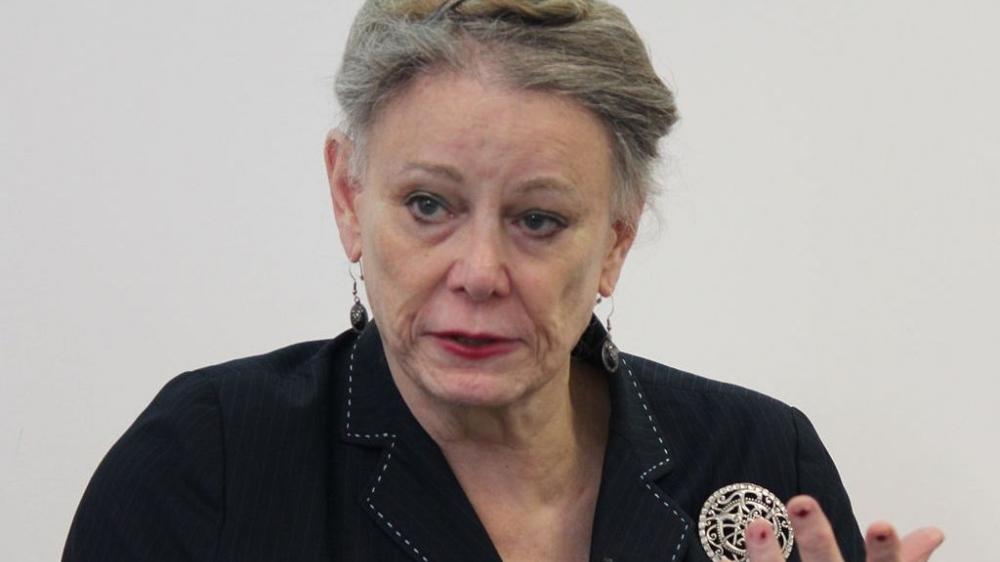 “Greeks should be inspired by the 5th century Athens”

At the same time, she estimates that populism worldwide will recede within the next decade, while Donald Trump will not only lose power, but will also be in prison. Although not specific to issues concerning Greece, she stresses that “based on my observations, the countries that are doing well are those that adopt liberal economic policies to some degree.”

She also believes that in spite of what is being said, people’s living standards have improved drastically and will continue to improve if liberal policies are adopted. “In 1800 there were much greater inequalities in Greece than there are today. There were rich traders, landowners, and then there were the villagers. And the gap between them was huge. “ In contrast, modern economies continue to thrive. Even the most mature economies are improving, because things are getting better. For example, medicine has been leaping in recent years. Similarly technology. “

You can the entire interview here (Greek only)

Talking about something I call Humanomics

In economics and political history, what is the word that
made the history of the world divided into “before” and
“after”?

In modern history this word is “liberalism”. It comes from the
word “freedom”, in fact the conception of the idea for this
word was created around the 18th century by the idea that all
society should be free. Then the ending -ism was added. Weak
groups, such as the poor and immigrants, need to understand
that the only environment in which they can have a real future
is Liberalism

The good future is understood, and logically, in economic terms

Only a free society can become a prosperous society. Adam Smith, in whose name I make my cross every time I mention it (actually made his cross in front of us), has spoken of the obvious and simplistic system of physical freedom. He said he was in favor of a liberal plan for Equality, Freedom and Justice. And when he says Equality, if we look a little more closely at what he says, he means equality of opportunity.

I know. I am a Protestant, but because I am in Greece I make
my cross like the Orthodox, in their honor.

Theoretically, the economy and humanity should be on
the same side. But many people believe that the economy
is hostile to humanity.

That’s how people think. I am talking about something I call
“humanomics” and which, in addition to numbers, should
take into account all the elements of human activity.
Elements from history, philosophy, even from theology.

Everywhere in the world young people are mostly
socialists or even communists. Do you believe that as the
years go by and because of globalization that can change?

No, this cannot be done. And I have been a socialist, a
positivist, I have been a man (smiling). The reason that
cannot be done, other than the revolutionary course of youth,
is because young children have more recent experience of the
family experience, which generally functions as a socialist
group. One supports the other when it is difficult financially
and in general they all share it.

But it is historically absolutely proven that this can work only
in very small groups of people, in a monastery, in a group of
people, but in no case can it even work in a small country of a
few million. The modern world has been built on the idea of
liberalism for centuries. All major revolutions in the Western
world, such as the American and the French, were based on
this idea.

After so many years dealing with philosophy and
economics, how would you characterize yourself?

I am a Christian liberal who feels deeply obliged to help the
poor, the weak and the sick. This obligation of mine can best
be fulfilled only in a free society. I believe in a free society, but
with ethical principles.

But in recent years, the weak have become increasingly
young

Agree. That is why another, fundamental obligation of liberal
society is to help young people. In Greece, as in the US,
policies are being implemented that make it very difficult for
young people to find work.

I understand what you are saying, because here in Greece
we are a country where, in theory, parents adore their
children and are over-protective, but in many ways their
decisions are against their future.

It is not only the governments that are responsible, but also
the older citizens of a country who make decisions and
operate in a way that is at the expense of the young.

But there is a paradox. In Greece, nearly 500,000 young
people have fled Greece, and have moved to another
country where there is a liberal system

Fortunately for them, and for Greece. And the fact that they
went to a country with a liberal system means that you are
doing something wrong here in Greece. They went
somewhere where liberalism works seriously.
Many governments, however, say they will create jobs,
something we generally do not see fit.

I had no intention of asking, but because you mentioned
before that you have been a man, I imagine that sex change
is something that a man can only do in the context of
liberalism

It’s not something I discuss in general, but I’ll answer it for you.
Of course, do you imagine I was born in Iran? There, just being
gay, they force you to change sex. Of course, even in liberal
societies you meet even scientists who have stupid, antiscientific ideas. In 1995, when I decided to change my sex, I
went to a famous American psychiatrist who asked me “are
you gay?” I answered “no”. “Then why do you want to change
sex?” … Think that 25 years ago even a well-known psychiatrist
had no idea of the subject. He didn’t know that there are
people, about three in a thousand, who want to change sex.